Among today’s many exceptional chamber music groups, the Danish String Quartet continuously asserts its preeminence. The Quartet’s playing reflects impeccable musicianship, sophisticated artistry, exquisite clarity of ensemble, and, above all, an expressivity inextricably bound to the music, from Haydn to Shostakovich to contemporary scores. Their performances bring a rare musical spontaneity, giving audiences the sense of hearing even treasured canon repertoire as if for the first time, and exuding a palpable joy in music-making that have made them enormously in-demand on concert stages throughout the world.

Since its debut in 2002, the Danish String Quartet has demonstrated a special affinity for Scandinavian composers, from Nielsen to Hans Abrahamsen, alongside music of Mozart and Beethoven. The Quartet’s musical interests also encompass Nordic folk music, the focus of its newest recording, Last Leaf, on the ECM label. The recipient of many awards and prestigious appointments, including the Borletti Buitoni Trust, the Danish String Quartet was named in 2013 as BBC Radio 3 New Generation Artists and appointed to the Chamber Music Society of Lincoln Center’s CMS Two Program.

The Danish String Quartet begins the 2018-2019 season in Europe with appearances at the Lammermuir Festival in Scotland, followed by Norway’s Trondheim Festival, where they perform Mendelssohn’s Octet with the Maxwell Quartet and collaborate with pianist Joseph Kalichstein in Brahms’s Piano Quintet. They return to London’s Wigmore Hall for a program that contrasts two Beethoven quartets with Webern. The Quartet tours North America,Europe with concerts in Munich, Milan, Antwerp, Berlin, Hamburg, and Madrid. The Quartet returns to the United States for performances in La Jolla, Santa Barbara, and Berkeley, appear for the first time in Logan, Provo, and Los Alamos, and return to play for the Vancouver Recital Society and Laramie.

The Danish String Quartet’s expansive 2017-2018 North American season included more than 30 performances across 17 states. In Europe, they toured Denmark, Norway, Germany, Luxembourg, and the Netherlands, and additionally performed in Australia and Asia.

The group takes an active role in reaching new audiences through special projects. In 2007, they established the DSQ Festival, now in its 11th year, which takes place in an intimate and informal setting in Copenhagen. This October, the Danish String Quartet performs, over the course of six concerts, the complete Beethoven cycle of 16 string quartets. In 2016, they inaugurated a new music festival, Series of Four, which they both perform and invite colleagues—the Ebène Quartet, mandolin player Chris Thile, among others—to appear at the venerable Danish Radio Concert Hall. Concerts this season range from a chamber version of the Fauré Requiem, a recital with violinist Augustin Hadelich, and the Scandinavian debut of the Vision String Quartet.

Named Artist-in-Residence in 2006 by the Danish Radio, the Quartet was offered the opportunity to record the Nielsen string quartets at the Danish Radio Concert Hall. The two CDs, released in 2007 and 2008 on the Dacapo label, garnered enthusiastic praise for their first recordings—“these Danish players have excelled in performances of works by Brahms, Mozart and Bartók in recent years. But they play Nielsen’s quartets as if they owned them,” noted the New York Times. In 2012, the Danish String Quartet released a recording of Haydn and Brahms quartets on the German AVI-music label, for which they also received critical notice. “What makes the performance special is the maturity and calm of the playing, even during virtuosic passages that whisk by. This is music-making of wonderful ease and naturalness,” observed the New York Times. Subsequently, they recorded works by Brahms and Robert Fuchs with clarinetist Sebastian Manz, released by AVI-music in 2014; Wood Works, an album of traditional Scandinavian folk music, released by Dacapo in 2017 and one of the top classical albums of the year, including on Spotify; and music of Thomas Adès, Per Nøgård, and Abrahamsen, the Quartet’s debut album on ECM.

Violinists Frederik Øland and Rune Tonsgaard Sørenson and violist Asbjorn Norgaard met as children at a music summer camp where they played soccer and made music together. As teenagers, they began the study of classical chamber music and were mentored by Tim Frederiksen of Copenhagen’s Royal Danish Academy of Music. In 2008, the three Danes were joined by Norwegian cellist Fredrik Schøyen Sjölin. 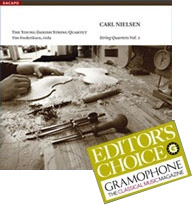 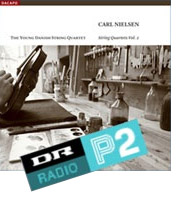