Born in Mexico City in 1979, Morgan Szymanski started playing the guitar at the age of six. Early studies at the National Music School (Mexico) and the Edinburgh Music School led to a scholarship to study under Carlos Bonell and Gary Ryan at the Royal College of Music (RCM) in London, graduating in 2004 with first class honours. During his studies he won all guitar prizes from the RCM as well as scholarships from the Tillett Trust, Countess of Munster Musical Trust, Leverhulme Trust, Wall Trust, FONCA and a scholarship to study at the Conservatorium van Amsterdam. He immediately went on to become the first solo guitarist to be selected by the Young Classical Artist Trust and was the first guitarist to be awarded a Junior Fellowship at the RCM, where he completed his Masters with distinction.

In 2016 he appeared live on BBC Radio 3 from the Hay Festival with the Cremona Quartet and Wigmore Hall with Mark Padmore. Highlights included a tour of China with the Carlos Chávez Quartet, and a tour of Mexico with Orchestra of the Swan giving the premiere of two concerti written for him by Alec Roth and Alejandro Basulto. In 2017 he has given a recital in Casa Luthier in Barcelona, the world premiere of Viva la Vida con Frida a show about Frida Kahlo at Chatsworth House with Lizzie Ball and St. George’s Bristol. Other highlights include a concert at Queens Hall in Edinburgh for the Mexican Day of the Dead Celebrations, and recitals at the North Norfolk, Jersey, Isle of Wight, Buxton, St. Endellion Festivals. 2017 sees also his debut at the Cervantino International Festival in Mexico.

Projects in 2018 include the release of a recording of nine world premieres written especially for him entitled El Árbol de la Vida (The Tree of Life) sponsored by the Mexican Arts Council, a tour of South Africa and concerts in Spain, Mexico, Italy and the UK.

Morgan is a resident artist at Beaminster Festival in Dorset, of which Sir Neville Marriner was Patron.

His many recordings on Sarabande Records have been described as ‘top class in every respect’ (Classical Guitar Magazine, 2005), and as ‘a jewel’ by Gramophone Magazine. On Szymanski´s ‘Sketches of Mexico’, Gramophone Magazine called it ‘a gorgeous and original tribute to Szymanski’s homeland, its artists and its music’ with Morgan’s playing ‘of the highest order.’ He has also recorded the works of Alec Roth for the Signum Label with tenor Mark Padmore. His latest recording, ´Nuevo Mundo´ is available on Sarabande Records.

He is a Live Music Now! alumni, the scheme started by Lord Yehudi Menuhin to reach audiences that would otherwise have no access to live music. ´ In 2016 he started PRISMA, an artistic outreach programme aimed at disadvantaged and remote areas in Mexico. 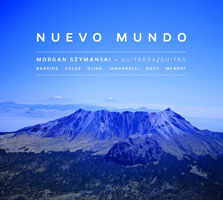